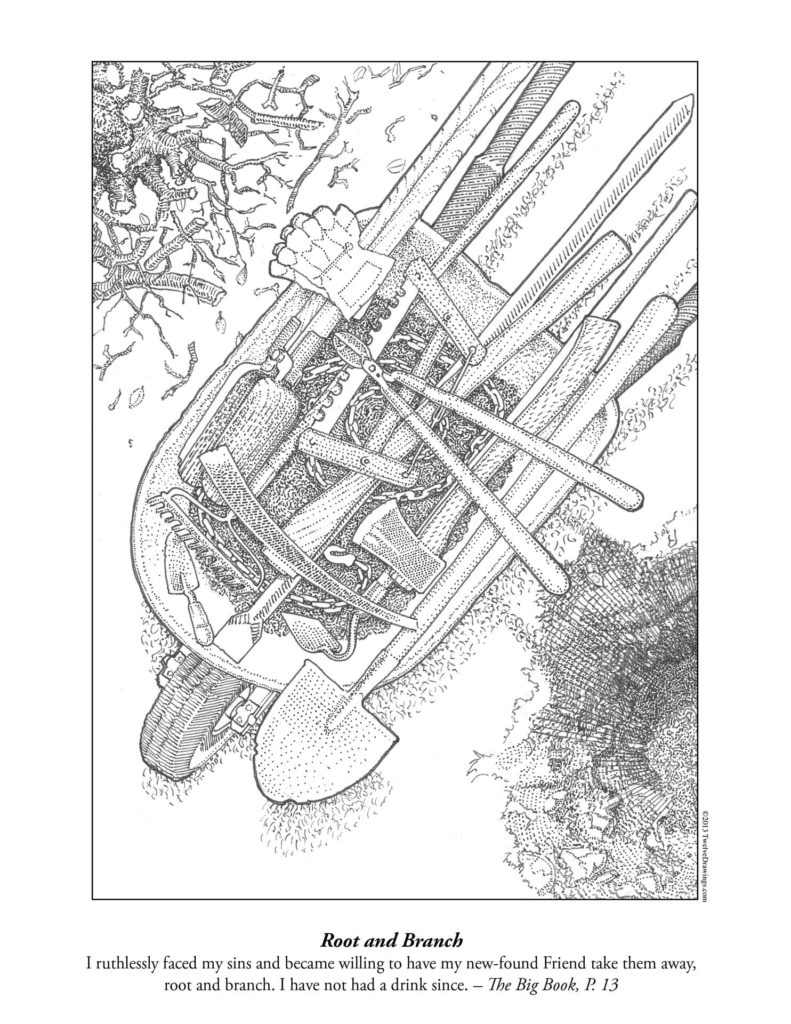 2. ROOT & BRANCH
I love the clarity of the words Bill W. used in this metaphor. He asked God to remove his defects of character “root and branch”. Those three words spoke clearly of his desire to have his problem fixed AND to also have the underlying causes removed. I wanted to make a drawing for each of twelve key metaphors that Bill W apparently created for the Big Book, but I doubted any drawing I could create would ever add much to Bill’s own words.
Still, I cast about for drawing ideas. It occurred to me how much work is involved to actually remove even a small tree “root and branch”. Not long before, I had removed an immature tree and remember being amazed by how many tools were needed. A professional landscaper today might use different equipment for the job. But the tools I used were not very different from ones that people in the 1930s would have used. I did my best to remember everything I used to remove that small tree.
The tools I listed were these:
I am like a lot of people; I imagine that my Higher Power can do anything instantly and effortlessly. But I also reflected that the God of my understanding made me in His own image which means we share some similarities. I pondered the amazing amount of manual labor required to fulfill that three-word phrase “root and branch”. It would be no small job, nor could it be done instantly or effortlessly by any person.
Someone humorously said, “You don’t have to believe IN God to start the Twelve Steps. But you must believe that YOU are not God.” No argument there. I am not asking my Higher Power to do manual labor. But I am asking for a favor and I need to remember that.
One added lesson came to me after I finished the drawing. When I asked my Higher Power to remove my defects, it involved more than real roots and branches. It involved remaking thousands of little defective connections I had sewn into my past and present. It required the removal of some thick and twisted wrongs to make way for the arrival of feathery new roots of improvement in me.
This may sound corny, but I suddenly felt very much loved. My earthly father worked hard for our family and I often saw sweat on his face. I was too young to appreciate that he didn’t HAVE to work all that hard. But I’m old enough now to appreciate what a gift I am requesting each time I bow my head and ask my Higher Power to remove my defects of character…..root and branch or not.
Posted in Metaphors
← 3. Mountaintop1. Quicksand →