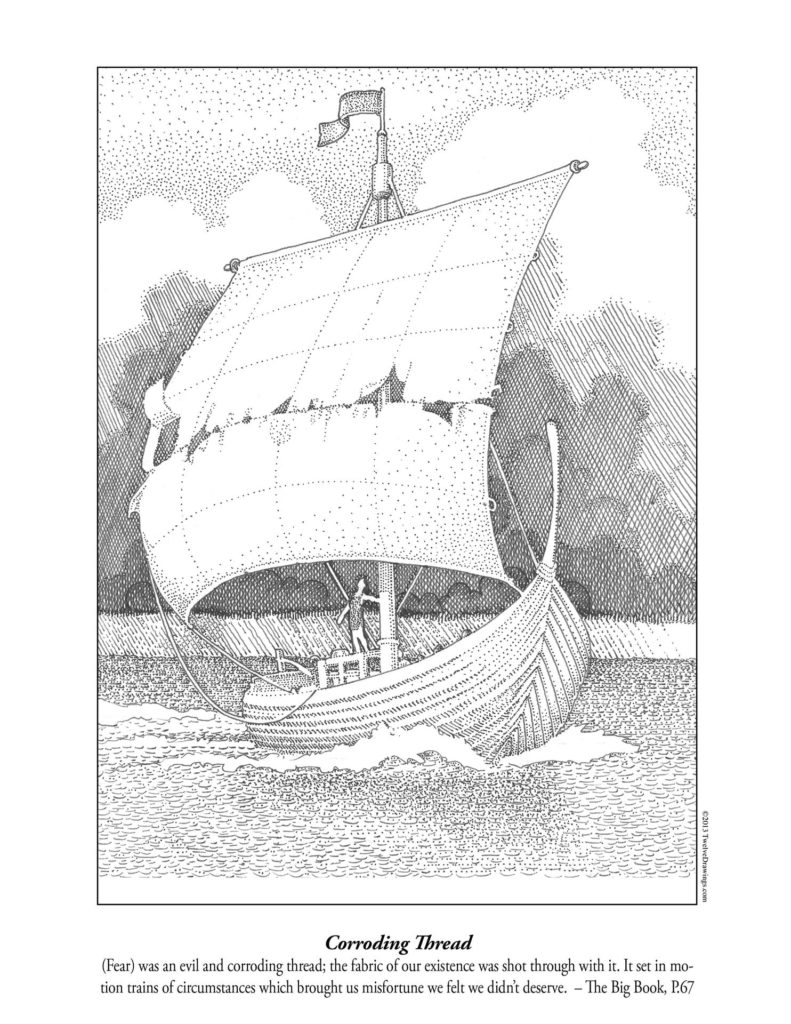 11. CORRODING THREAD
“Unspeakable fear” is not from the Twelve Step literature; it is from me. I find fear to be almost impossible to talk about. When I talk about fear directly, the subject matter has no solid meaning. There is my fear of falling, of taking tests, of public speaking, or of dying. Clearly, fear has many degrees, most of them go unnoticed by me until they drive me to unfortunate actions. Only afterwards do I recognize that fear was my motive for grabbing more than I deserved (selfishness) or avoiding the truth (dishonesty) or disregarding the needs of others (inconsideration).
In other words, fear “was an evil and corroding thread; the fabric of our existence was shot through with it.” (NOTE: Some people don’t like to use the word “fear”, perhaps because admitting fear is considered weak by some. At first, I substituted the word “anxiety”. To me, they were the same emotion but felt to much different degrees. Soon, I became comfortable using the word “fear” freely.)
I know my Higher Power can break the spell of fear, but only if I ask to be filled with His will. For example, when I feel tempted to get angry, selfish, or inconsiderate, I ask God what He would have me be. Most of the time, I realize my fear has taken control of my thoughts and actions. Driven by my fear, I might feel justified in somehow punishing someone who has triggered my fear. But my Higher Power’s view might be: “Don’t worry about it. You have done much worse. Leave justice up to Me.”
I have begun to call fear my “lower power” because it seems to grow stronger when I neglect or ignore my Higher Power. In my experience, fear steals power from me whereas God seems to flood me with His power.
The Illustration
When I thought about how to make a drawing based on the word “Fear”, the choice was not an easy one to conceive. I don’t like to use pure symbolism, preferring real situations like Bill might have had in mind. I wondered in what circumstances might a single “corroding thread” be a serious problem. Thread does not truly corrode in exactly the same way that rusty metal can corrode nearby metal. But if a thread were to ruin the usefulness of nearby fabric, that would fit the definition as I understood it.
Thus, I conceived of a sailing ship with one single sail. Across its center is a tear which follows the path of a single thread. The failure of that one thread threatens the usefulness of the entire sail. This failure is especially worrisome considering the dark storm clouds looming in the background. Such a failure of a single thread puts the sail, the ship, the cargo, and everyone on board at risk.
I am not certain what Bill W. had in mind when he wrote about a “corroding thread”. But his words reminded me that I must prevent fear from holding a key place within the fabric of my being. Another way I say it is, every day of recovery involves a choice between the lower power of my fears and the Higher Power of the Divine.
Posted in Metaphors
← 12. Tornado10. Arch →