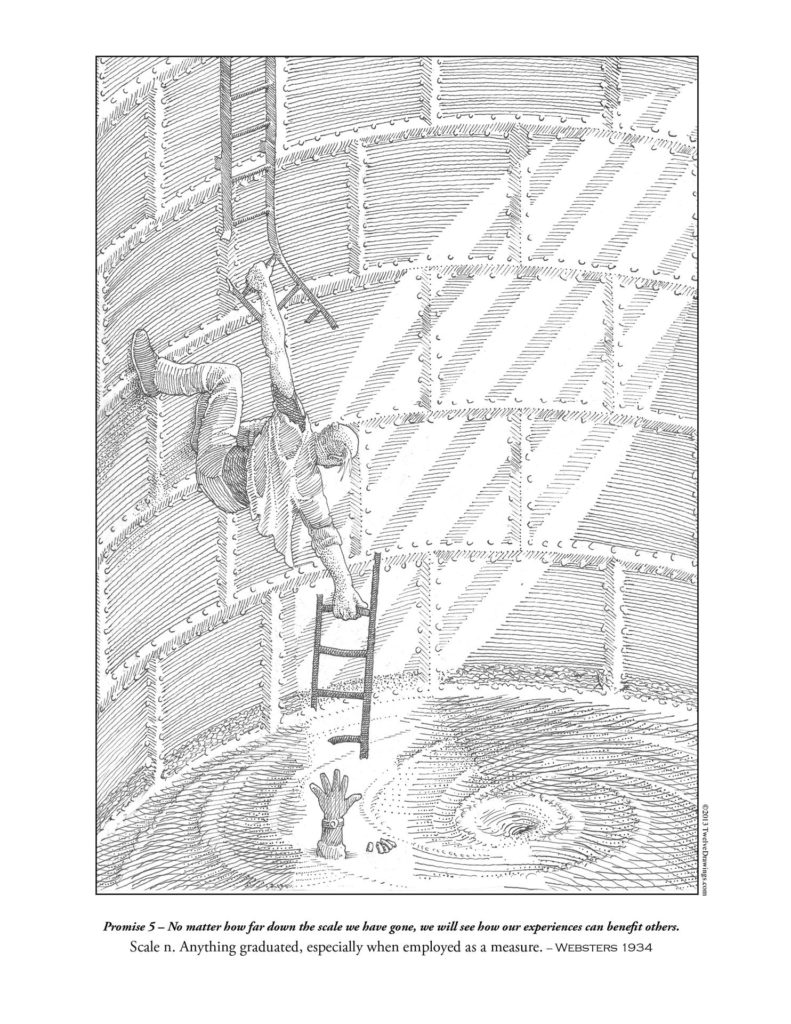 5. SCALE
During my years in Twelve Step recovery, I have been a sponsor and I have been a sponsee (someone who receives sponsorship). This drawing is about both of those experiences, each from a different point of view.
First, I was a sponsee.
I often felt I was drowning. Literally. My dreams and thoughts were filled with large bodies of water or rising water. My sponsor didn’t exactly rescue me. It’s more accurate to say he kept calmly repeating, “Just work the Steps.” When I listened, that kept my head above the imagined water.
Later, I became a sponsor.
was often dismayed to realize my sponsees were drowning before my eyes. My words and actions seemed ineffective in the face of the crisis I saw looming inside them. I could never save them using any thought or word or deed that sprang to my mind.
It took a long time for me to realize why my sponsor was so helpful to me. It wasn’t because he had the answer I needed. To the contrary, he would sometimes look at my situation and say, “Damn, that looks like an awful situation to be in.” This man—someone I hardly knew— was not there to fix my situation. But he was willing to remain with me throughout my struggles.
As a sponsor myself, I found that simply being present was the most helpful thing I could do for my sponsees. I could listen to their situation, point out any applicable literature, and share my own experience. They seldom said, “Wow, that fixed it!”. They would instead say, “Thanks for being there.” That is an act I cannot define beyond answering some phone calls and meeting to talk about recovery. Whatever it is, it seems very important to recovery.
The promise that started with the words “No matter how far down the scale we have gone…” was a welcomed one. I knew I had gone far down the scale and was relieved to hear that my awful experience might have some redeeming value. Most people would never ever want to go as far down as I went. Never. Not ever.
And yet when a sponsee described an immeasurable moral abyss that they had fallen into, I found myself leaning toward them rather than leaning back. I would just let them talk, knowing it is very hard for them to admit how low they had sunk.
I can be there with them; “Being there”. Able to listen with surprising ease because this low place is very familiar ground for me. I cannot really measure how far down the scale they have gone. It is a scale that has no units of measure. But I go there with them—”Being there”—until they touch the bottom.
In this way, the Promise has came true for me many times. No matter how far down the scale I have gone, I see how my experience benefits others.
So who is that guy on the ladder in my drawing? The one with the torn shirt and drooping hair, trying so hard to win an apparently unwinnable battle for the man who is sinking? That everyman is every sponsor I have ever had. He is doing more for me than I deserve—perhaps paying back his debt to a sponsor before him. He is not able to reach me, but he is able to “Be there” with me even at that depth of despair.
When the drawing was finished, I showed it with some pride to my father. He looked at the drawing for a long time, then candidly said, “I find this situation terribly hopeless.” I asked him why. “Because they’re not going to make it. The drowning guy is going to drown.” I looked again at the drawing and saw what he didn’t. It’s not really sponsors who save sponsees. It is that certain Higher Power who we find at that bottom rung of the scale. The sponsor is there to share their hope, even when we think no one has been that far down the scale before us.
“I see it differently,” I said to my father, “That sponsor still has not quite reached the bottom of his scale yet.”
••••••••••••
I dedicate this drawing to my sponsors over the years, and to the Higher Power who I met through them.
Posted in Promises
← 6. Disappear4. Peace →