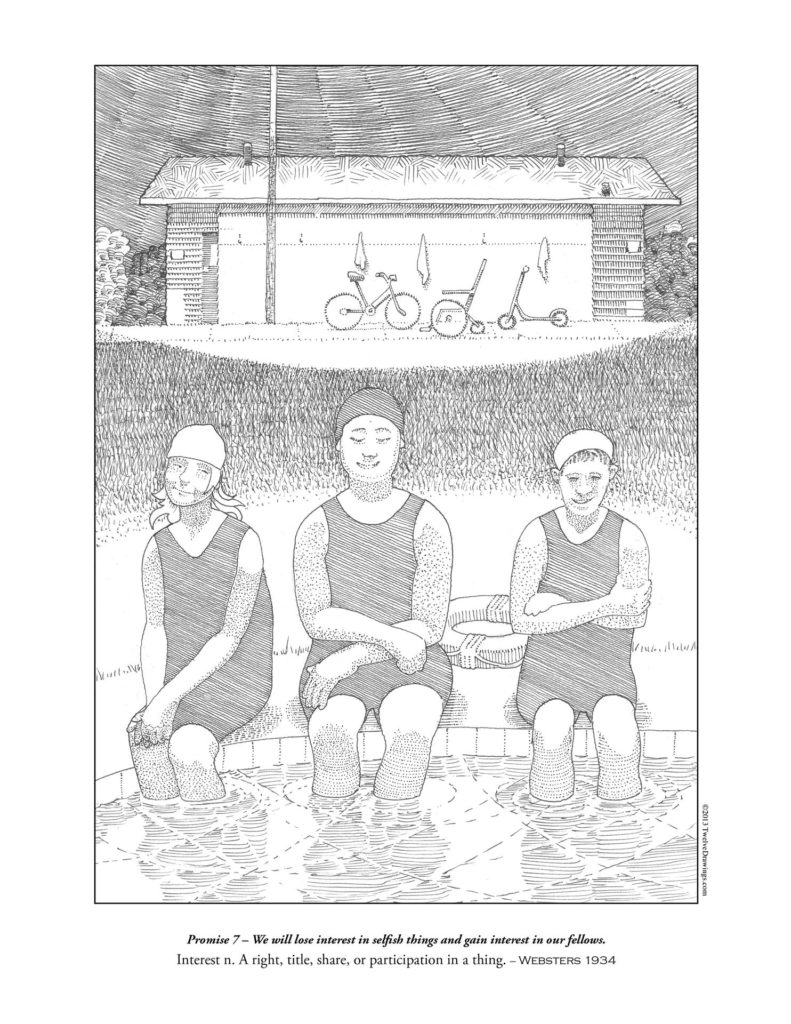 7.  INTEREST
Attending meetings involves spending time with one’s “fellows”….fellow alcoholics, fellow drug addicts, fellow behavioral addicts, etc. I have heard some claim sitting in a Twelve Step meeting (without working the Steps) will produce lasting sobriety. Personally, I doubt it will. After all, simply sitting in a bar does not produce an alcoholic; it is the drinking done while there that produces the results. I suspect the same is true for recovery.
The only formal requirement for joining a Twelve Step meeting is “the desire to stop…” (drinking, drugging, or acting out on a behavioral addiction) “…and to help others to recover.” Once you start attending a meeting, your personal level of interest may vary. Some people linger after the meeting is over, while others depart without delay. During the meeting itself, everyone shares an equal interest in the fellowship. Webster’s Dictionary defines “interest” this way:
“Interest n. – a right, title, share, or participation in a thing.”
In my experience, that definition is correct. The Twelve Step newcomer enjoys the same rights as the old-timers. The fact that long-sober people don’t demand a higher status may puzzle the newcomers at first. These old-timers are not saints—they have learned that healthy interest among ANY members is helpful to all. Isolated and self-absorbed behavior seems to fuel addiction, and so recovering addicts instinctively encourage each other to become less isolated.
Addicts and alcoholics who do not gain interest in their fellows can slip back into isolation where their addiction lies waiting.
When I decided to draw this Promise, I felt a little lost. All of the depictions I envisioned seemed silly. As I often do, I prayed about it. Once again, a vision slowly formed. It was exactly what you see in the drawing. Several kids perched on the edge of a swimming pool. They are not swimming. They don’t even appear to be talking. They are just BEING there. Their differences are quite visible. They probably come from different families. They appear to be different ages. They arrived by different means. Yet there they sit together, instead of being alone.
Maybe recovery is complicated. But at moments like this, it seems fairly simple. We attend meetings. We work the Steps. We use sponsorship. We find that when we do these things, the Twelve Promises are realized.
I cannot say much more about my drawing than this: The way those kids look in that drawing matches the way I feel in a busy Twelve Step meeting. I am not in my old home, all alone. I am in a new home, surrounded by people who know me and care. Even if it is just one or two people, they are enough. Our Higher Power does the rest.
Posted in Promises
← 8. Self-seeking6. Disappear →