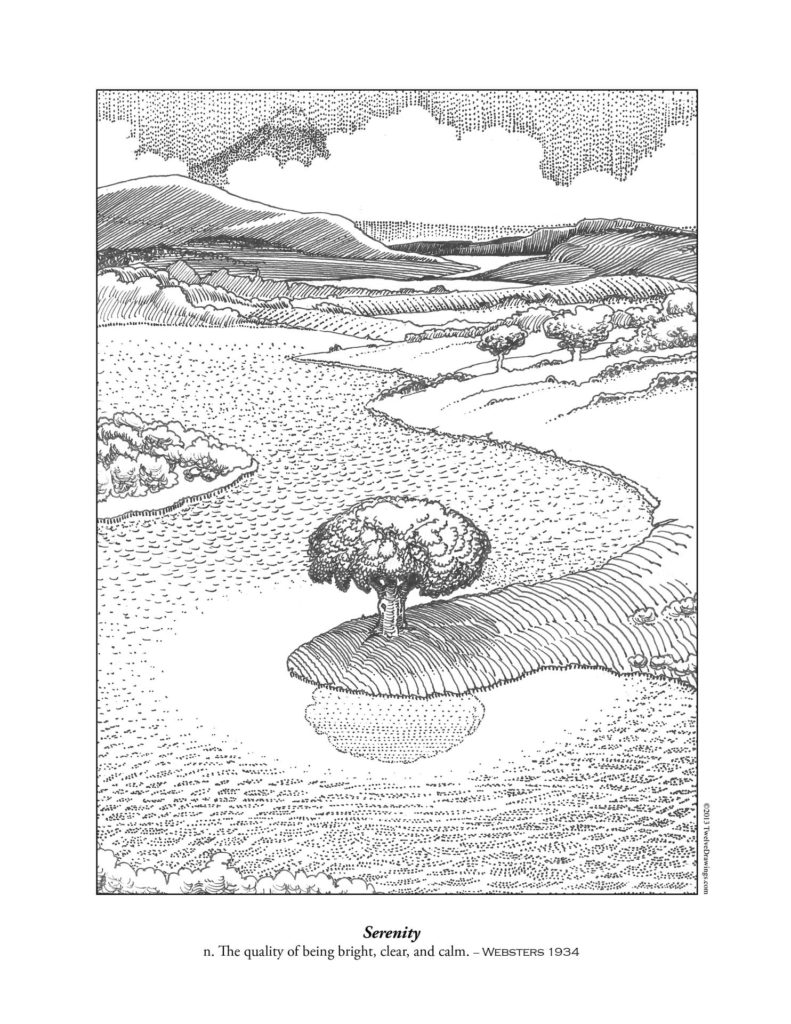 3. SERENTITY
“God, grant me the SERENITY to accept the things I cannot change”
The Serenity Prayer sounds rather sweet…. as if as if it was specifically written for an inspirational poster or a sentimental greeting card. The familiar words can often be nestled near a setting sun, ocean shore, or mountain vista. The prayer is so often repeated that it has almost become a cliché. However, the hope it offers is deadly serious to people who fear they will die if the disturbances inside them are not replaced with serenity.
Webster’s 1934Dictionary offers this definition: “Serenity n. The quality of being bright, clear, and calm”.
As an artist, hoped my prayer and meditation would produce something dramatically different from all those picturesque posters. I was very DIS-pleased when my my reflections on on the definition of “Serenity” produced yet another pastoral drawing. Every other drawing in my Serenity Prayer series seemed to contain something surprising, original, unconventional, or even mysterious. Still, I was committed to creating the drawings that my Higher Power inspired, whether I liked them or not.
Only after the Serenity illustration was finished did I recognize its important message.
In the drawing, a tree stand on the shore of a river. The surface of the water is broken up by some fairly ordinary looking waves. In the area closest to the tree, however, the water appears very still and smooth. Who hasn’t seen exactly that type of becalmed water in the midst of light waves?
A distant memory came back to me. My high school physics teacher taught that when a wave travels, it will not stop until it is stopped by another force. We may think of waves as tapering down as they travel, but that’s not entirely accurate. The reason they appear to lose size is because their force becomes spread out around an increasingly expanding circle. According to the scientific explanation I heard, waves cannot abruptly halt in mid-water.
Still, haven’t we have all seen such patches of mirror-smooth water amid rippling waters? I am confident that science can explain it. But I still marvel at it whenever I see that effect on real water.
I received a personal message from this drawing. I can turn my inward gaze toward flat water when confronted by a world of choppy and unsettling distractions. I no longer ask my Higher Power to stop the world around me. I can ask for help being bright, clear, and calm inside myself whenever I choose.
Posted in Serenity
← 4. Accept2. Grant →