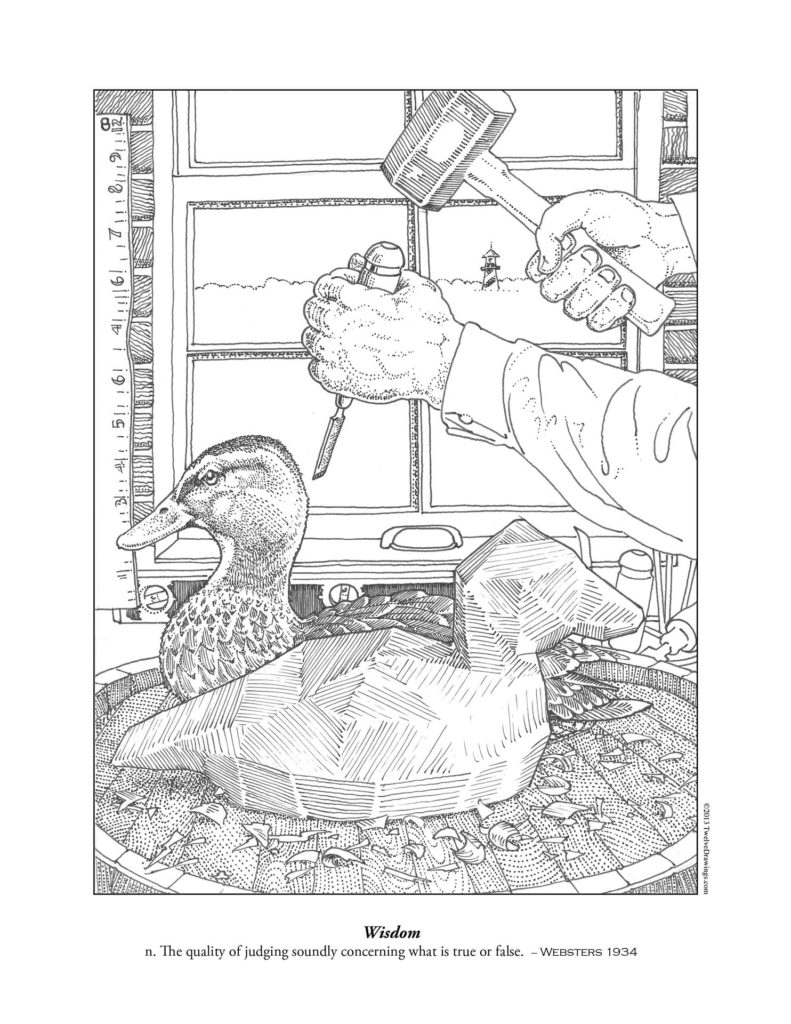 10. “And the WISDOM to know the difference”
The definition: “Wisdom n. the quality of judging soundly concerning what is true or false”.
This drawing is difficult to describe in terms of the Serenity Prayer alone. In the Twelve Steps of recovery, the insanity which all addicts and alcoholics suffer can be traced to “a lack of proportion, of the ability to think straight.” I wonder how many people in recovery have read that phrase countless times without pondering what it literally means.
A “lack of proportion” (as I understand it) means confusion over the size of things. For example, when two cars collide, the two drivers may view the damage very differently. One might examine a small scratch and declare, “My perfect car is RUINED forever!” The other driver might yank off their crushed bumper, throw the broken windshield in their back seat, thump on the hood confidently, and declare, “Mine’s not so bad; I bet I can still push it home!” The two drivers cannot agree about the true proportion of the damage. What most non-addicts cannot understand is that both of these attitudes can co-exist inside the same head for decades.
The “inability to think straight” is equally puzzling. When I receive a paycheck on Friday, I could take it straight to the bank and deposit it. That’s straight thinking. My insanity would have me believe that if I bought lottery tickets until the money ran out, I’d certain win something. Armed with those winnings, I could buy a car and maybe a motorcycle. When I pull in the driveway, my wife will be so thrilled by our new-found wealth that her parents will admit that they were wrong about me being an irresponsible fool. When my insanity reigns, I lose my ability to think straight.
Knowing these two aspects of insanity from the Twelve Step program colored my interpretation of the word “Wisdom” in the Serenity Prayer.
The definition speaks of the true and the false. This was exactly where my sanity slipped the most. As I began the new drawing for “Wisdom”, I wondered what that moment would look like when my perfectly sensible mind turned from sane to insane. I thought about the tremendous effort that duck decoy makers put into creating lifelike imitations of the real thing.
In the next instant, I found myself sketching the moment when such a craftsman might suddenly lose their sanity. The change would not be instantly noticeable. They would use the same tools and make the same motions. Except this time they would have confused the real duck and the wooden decoy. In that instant, they stop doing what they intended and begin doing something very destructive.
Duck decoy makers will chuckle at my inaccuracies. But the truth remains the truth. How many times did I suddenly confuse my property with someone else’s? Did I treat my employer’s time as if it were my own? Did I covet another’s wife as if she should be mine? The insanity piled higher and higher. But what’s hard for most people to believe is that I didn’t realize the switch between true and false had occurred. I had elaborate excuses, explanations, and rationalizations for these lapses into unreality.
I have returned to sanity, thanks to a Power higher than human power. And while medical insanity does not come and go easily, mine still does. If I do not follow the program of recovery, I can look down and realize my hands are no longer servants of the pure and simple truth. Just like the hands in the drawing.
•••••••••••
TRIVIA: Did you notice that the ruler hanging on the wall is wavy and there are zeroes where some inch markings should be? That’s because page 37 in the Big Book includes a remarkable definition of “insanity”. Bill W made it clear he was referring only to alcoholic—and probably addictive—insanity when he wrote: “Whatever the precise definition of the word may be, we call this plain insanity. How can such a lack of proportion, of the ability to think straight, be called anything else?” The ruler in my drawing cannot be used to measure sizes correctly (lack of proportion) nor can it be used to draw a straight line (inability to think straight).
Posted in Serenity
← 11. Know9. Courage →