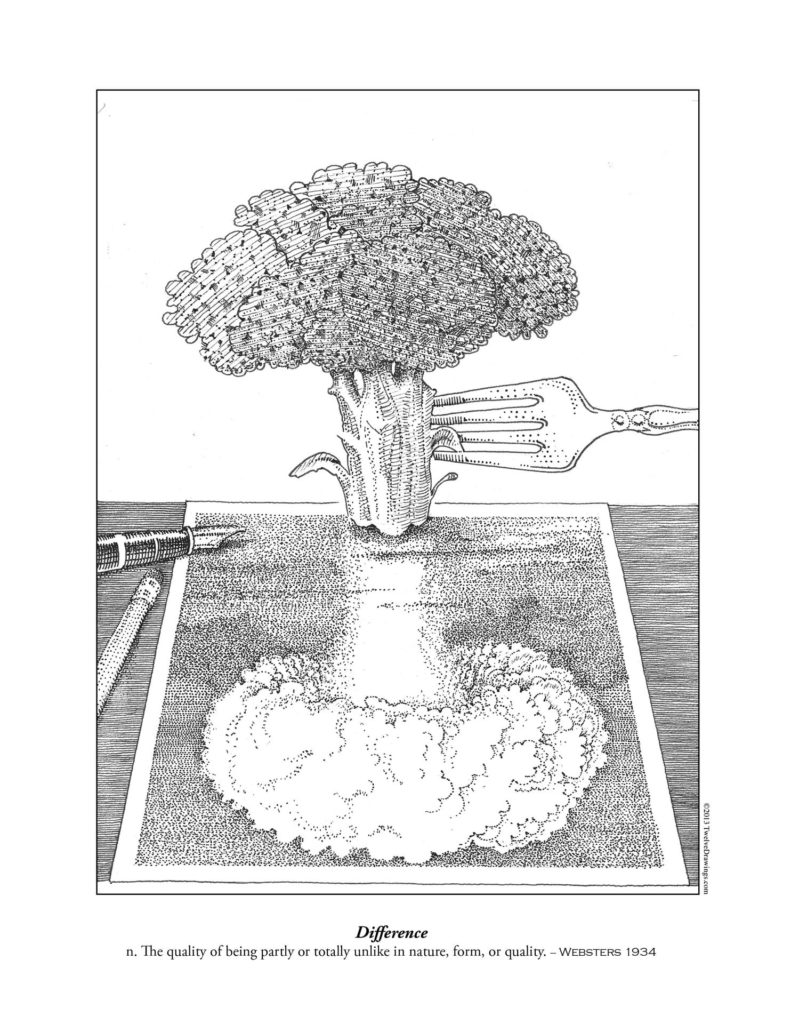 12. “And the wisdom to know the DIFFERENCE.”
The definition: “Difference n. the quality of being partly or totally unlike in nature, form, or quality”
In this instance, the imagery became my central focus, since the text held no surprises for me. I carefully crafted an illustration that you cannot see here. It consisted of a majestic mountain on the distant horizon and, in the foreground, a small hill. In fact it was a molehill. The kind that moles live under. It was a literal interpretation of “Making a mountain out of a molehill” <groan>. It would make sense if you saw it because the mountain (looking rather small in the distance)  and the molehill (looking quite large in the near foreground) actually bore a remarkable resemblance to each other.
The idea was a perfect fit. The Big Book of AA defines insanity as “a lack of proportion” (p. 37). Simply put, big things seem small and little things seem big. This is particularly true in relationships. Those who suffer this insanity are likely to spend precious paychecks on gambling, drinking, sex, or drugs. This, while the much greater need for the money exists at home with the family. Thus, the opportunity for a “good time” becomes disproportionately large while the enormous needs of the family are dismissed as trivial.
The mountain and molehill was a perfect idea. But it was not a perfect picture. Almost no one who saw it made a connection between the visual image and the word “molehill”. All of my drawings are inspired by prayer and meditation. I wasn’t about to reject it because of the reactions of a few.
When I had finished all twelve drawings, I set them aside because I had no particular plans for them. When I would pass by and leaf through them, the “Difference” drawing felt flat and uninspired. I had never made a replacement drawing before and was concerned this might start a habit of second-guessing myself.
Then I read a book about Nagasaki and the atomic bomb. The imagery worked its way into my mind. I had a relative who was known for behaving badly in restaurants whenever she found anything imperfect about her meal. She would call the waiter over and begin a prolonged episode of scolding and irritated correcting which unintentionally cast a dark cloud over the mood of everyone within earshot. In other words, she would “go nuclear” (to use a popular slang for overreacting). One thing in my mind led to another…leading to the drawing you see here.
To some, the resulting new drawing looks somewhat like a stalk of broccoli and, below it, what could be a cauliflower stalk. It is not cauliflower. The lower image shows the enormous mushroom cloud generated by an atomic bomb. In the Nagasaki book and the restaurant ravings of my relative, I had found two disproportionate “equals”. Where anyone else saw an overcooked piece of broccoli, my relative saw mass catastrophe on an unimaginable scale. I myself have similar blind spots. I can get fighting mad when someone beats me to a choice parking spot. I sometimes think that watching a rerun on TV is more important than going to a recovery meeting. Plus, I sometimes forget Who got me sober and take credit for that myself. Talk about “a lack of proportion”.
Posted in Serenity
← Traditions11. Know →