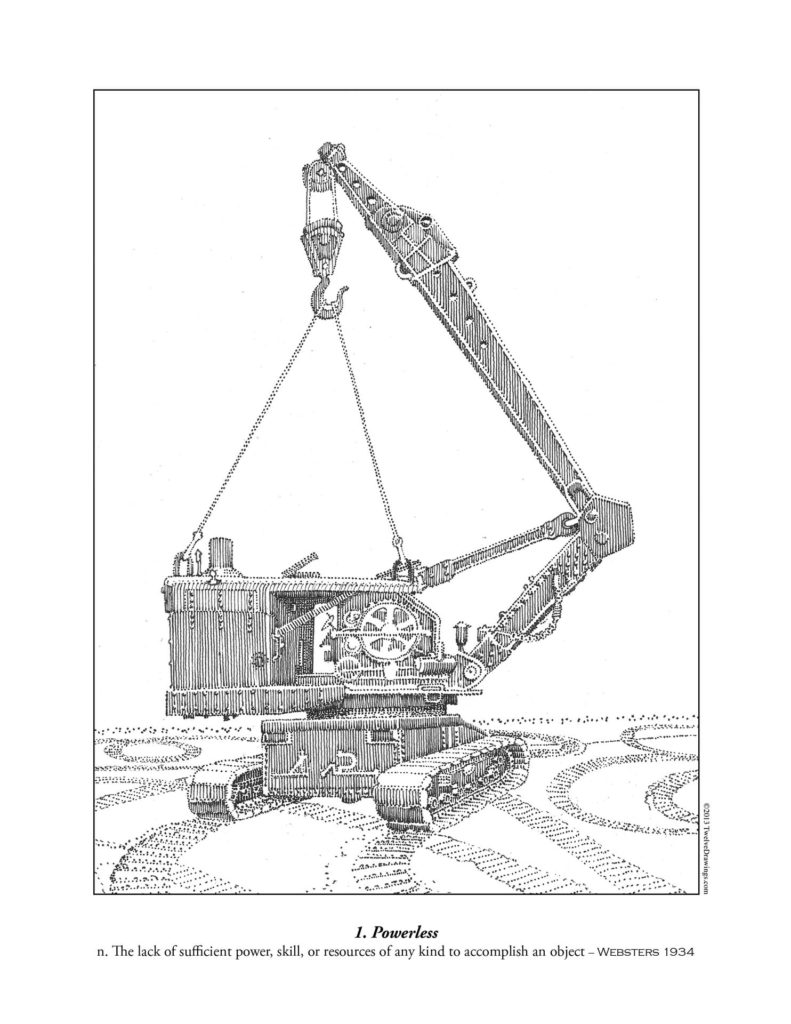 1.  POWERLESS
When I decided to try the Twelve Step program, it became clear I didn’t really know anything about them. So I was relieved when Step One appeared to be so self-explanatory. It asked me to admit that I was powerless over my problem, and that was not hard for me. I had already lost my marriage, my business, my house, and the care of my children. Even after that, things kept getting worse, so of course I could admit I was powerless.
Almost as soon as I started working Step One, I began seeking excuses for not fully working it. Don’t ask me why. I thought I should do what Step One said, but only halfway. I started thinking that half-measures might work, so I looked for loopholes in the Steps.
I questioned whether I was truly “powerless”. I knew I still had the power to drive a car, write a check, or play a musical instrument. I can remember marveling at how logical my argument sounded. With this as my dubious justification, I worked the program while mentally holding myself back from it. Any sober person could have told me that such half-measures would avail me nothing.
With the help of a devoted sponsor, I later got my thinking straightened out. It was later that I looked up the word “powerless” in my 1934 Webster’s and found this:
“Powerless – n. Destitute of the ability (whether physical, mental, or moral) to act.”
This definition seemed to speak directly to my recovery. When I take Step One, I am admitting I lack the power to act. Some actions I wanted to take were to 1) stay sober, 2) stay married, 3) support my family, 4) be a good parent, or 5) keep my business. I wanted to take all of those things but could not. As a direct result of my addiction, I lost them.
Had I faced the facts from the start, I would have easily admitted I was powerless. I would never have used any other forms of power as a diversion. Step One never asked if I was powerless over writing checks, driving a car, paying music, etc. Step One simply says “we were powerless”.
In my days before recovery, I had used every available resource to defeat addiction. I used intense willpower, but it failed. I spent years in individual counseling, but had no luck. I went regularly to church, without becoming sober. I exhausted every power, “physical, mental, or moral” but could not defeat it. At last, I had to agree with the Big Book of AA and Websters Dictionary; that I was truly powerless over my addiction.
When I decided to illustrate one word from each of the Twelve Steps, the word “powerless” stumped me. I sketched a leaf in a stream, because it is powerless over the water. I showed a person stretching to grab something they could not reach. These images were okay, but they really did not convey my message of recovery.
I asked myself, “What is powerful enough to lift any object, but is powerless to lift itself?” Quickly, I sketched an enormous and powerful crane straining to lift itself. At its original small size, the crane looked too slapstick—nothing more than a childish cartoon, So, I set it aside. Later, fed by prayer and meditation, I returned to it and made a larger drawing. Far from looking comical, the drawing nearly stopped my heart. Looking into that drawing was like looking into a mirror. It carried my Message: “I can do much, but I cannot save myself.”
The saying “A picture is worth a thousand words” probably applies here. The drawing explains itself. An incredibly powerful-looking crane flails helplessly in the futile goal of picking itself off the ground. Not only has it exerted every available force, but the tracks in the snow reveal a common attempt to fix the problem my moving to a new place. All for nothing.
I chose this machine because it looked so mighty, but other machines (like trains or ships) wield much more mechanical power than this one. Still, the message of powerlessness remains the same, even if the strength of the machine is multiplied a thousand times.  It, like me, needs a Higher Power than itself.
Posted in Steps
← 2. RestoreSteps →