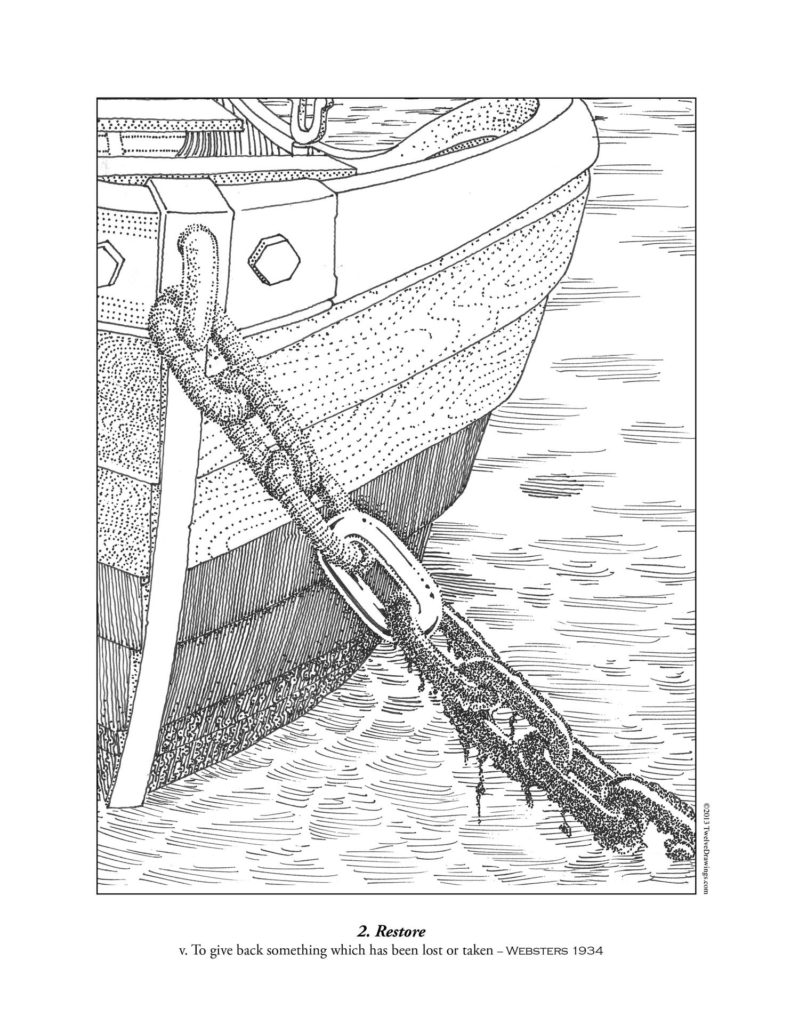 2. RESTORE
​​​​​​​Step Two reads as follow: “Came to believe that a Power greater than ourselves could restore us to sanity.”
Some Steps were hard to understand but the wording of this Step was straightforward. The phrase “Power Greater than myself,” was a familiar one, so I wasn’t surprised to see it in this Step. My thoughts were still very vague about the Higher Power that might be involved. I took the Step quickly—probably much too quickly.
My hurry was understandable. At that time in recovery, I was desperate to have my sanity restored. I had experienced many absurd disconnections between my thoughts and actions, and would have gladly followed any suggestions to bring my life under control.
In my initial rush to get through the Steps; I did not give enough attention to Step Two. As a strong-willed person, I thought that I could restore myself to sanity by working the Steps. I grumbled, “If some mysterious Power is going to restore me to sanity, then let IT take the Step instead of me.” My sponsor steered me back to Step One, making sure I recognized that I was in no shape to restore anyone’s sanity, least of all my own.
When we returned again to the Second Step, I understood it more clearly. Step Two was a choice between belief in a Higher Power or in a lower power—meaning the types of human power which failed to save me from addiction. Presented with those grim choices, I came to believe. Eventually, I looked up “Restore” in the 1934 dictionary, which was:
“Restore – v. To give back something which has been lost or taken.”
I noticed the phrase “to give back” rather than “to take back”. My solution would not come from my self. It had to come from another. There, in the black and white pages of an old dictionary, I found that my sanity had to be given back to me… I was powerless to make it return on my own.
When I turned to my drawing for “Restore”, I faced a dilemma.  I had promised myself I would use only images taken from real life. That ruled out extremely symbolic scenes such as a castle floating on a cloud or an angel rushing to rescue someone. I pondered my upcoming “Restore” drawing for a long, long time. I briefly considered creating a scene showing a person was returning a belonging—perhaps a borrowed tool—to another person. But that didn’t match the dictionary definition of “lost or taken”. I had not loaned my sanity to someone; I had lost my sanity completely.
For whatever reason, images of boats crossed my mind, particularly boats near the water’s edge. I knew that a moored boat which comes untied will eventually drift away. That certainly fit my experience of insanity. I had not driven my sanity away on purpose, but I lost it gradually, just the same. I tried sketching boats adrift on the sea with untied ropes or broken chains dangling over their sides. But again, the images did not match the definition of giving something back.
Then one particular image formed itself in my mind. I sketched a small boat which was held fast by a chain which had obviously been repaired recently. The chains halves had clearly been separated for a long time. The upper end had become coated with a patina of dry rust while the lower end was encrusted with the soupy slime found at the water’s bottom. I felt a mild jolt through me—something which usually announced the arrival of a worthy image.
I drew a bright and shiny link which reconnected the two broken ends together. The sturdy new link was obviously stout enough to reunite the two ends and restore the chain to its original purpose. The idea seemed right, but for a short time, I despaired that this image might be too dull to interest other people. Everyone likes a little drama and there was no drama whatsoever in this image. But when ideas arrive through prayer and meditation, I have to let them speak for themselves.
Even today when I see the drawing, I find myself swallowing hard. This drawing is a confession of the neglect I inflicted on my family. Even as I have been restored, nothing changes what they went through. I lost my sane mind for a very long time. And it would still be gone had it not been restored for me by my Higher Power.
On better days, this image reminds me of the renewed life I have been given through recovery. The slimy end of the chain speaks of my freedom from the murky mire of isolation. The rusted chain is a reminder that my mind was set adrift, but has been refound. Oh, and that shiny new link that restored the broken chain? I only know that it was formed by something greater than human power. I cannot fully explain that statement, but I completely and firmly believe it.
Posted in Steps
← 3. Decision1. Powerless →