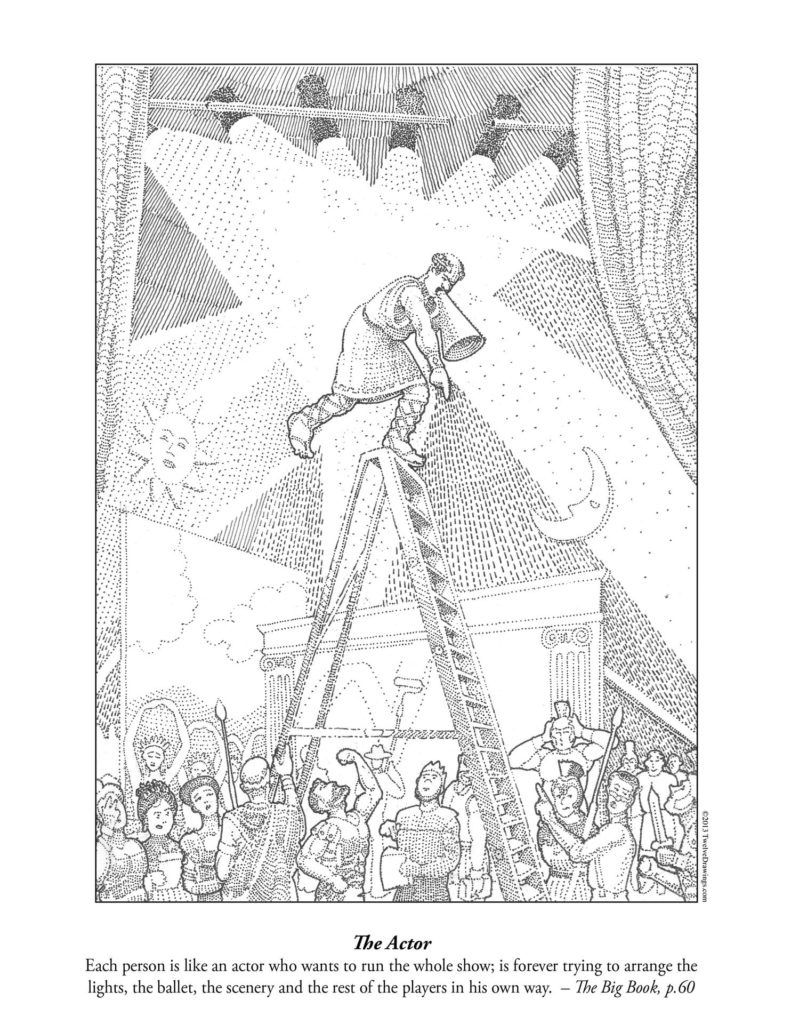 9. ACTOR
When I first read the Big Book of AA, I was on on a sort of mental autopilot. I was hurting and distracted. Honestly, I didn’t care very much what this man in the 1930s had to say. I respected his military service, but that was in WORLD WAR I…more than 100 years ago! So, I muddled through the yellowed pages, griping to myself that someone should update this musty old book using modern language.
Things changed when, on page 60, I met an imaginary actor. The author Bill W. used the actor to ask readers to reconsider their own habitual behavior. He was writing the book specifically for alcoholics who generally do not like being told how to think. To get his point across, Bill invented a character who does not exist in reality, but whose story makes a very real point. In short, he used an imaginary actor as a metaphor.
The description is one of the longest metaphors in the book, so I won’t repeat it here. But in it, this actor decided he knew better than anyone else how the current play should be staged. Overruling the director, the actor was “forever trying to arrange the lights, the ballet, the scenery, and the rest of the players in his own way.” (Big Book p. 60).
Bill W. used this tale about this egotistical actor to nudge me into admitting I was guilty of the same attitude. Until that moment, I honestly believed I should be the one who ran the entire universe. I thought I knew everything and that others were incompetent pretenders. Like that actor, I had tried to control everyone around me using charm, threats, dishonesty, and bribery, but I was never satisfied with the outcome for long.
In that description of the actor, I saw myself. And through that actor, I realized that whoever wrote this stale, outdate, Depression-era book knew me better than anyone else alive. My arrogance deflated slightly. Through Bill’s metaphor, I could clearly see that this actor character was causing his own problems through HIS attitudes, and that his attitudes were MINE as well.
My drawing “The Actor” is perhaps the most literal of all my Twelve Metaphor illustration. I drew exactly what I heard described: the ballet, the lights, the scenery, the director. I had fun staging exactly as I had pictured them. A different person might picture it differently, but that is the magic of well-chosen metaphors… they get into each reader’s imagination, then use that imagination to make their point.
I have nothing to add beyond what the Big Book says about the actor. Like him, my ego was out of control and the harder I tried to direct other people, the more I hastened my own downfall. Like him, I had scampered up the ladder but could never stay there long. Like many other Big Book readers, I had to start a search for a new and more qualified “Director” whom I could trust to run the show. I found such a director in my Higher Power—thanks, in large part, to a real World War I veteran and an imaginary actor in an imaginary play.
Posted in Metaphors
← 10. Arch8. Wringer →