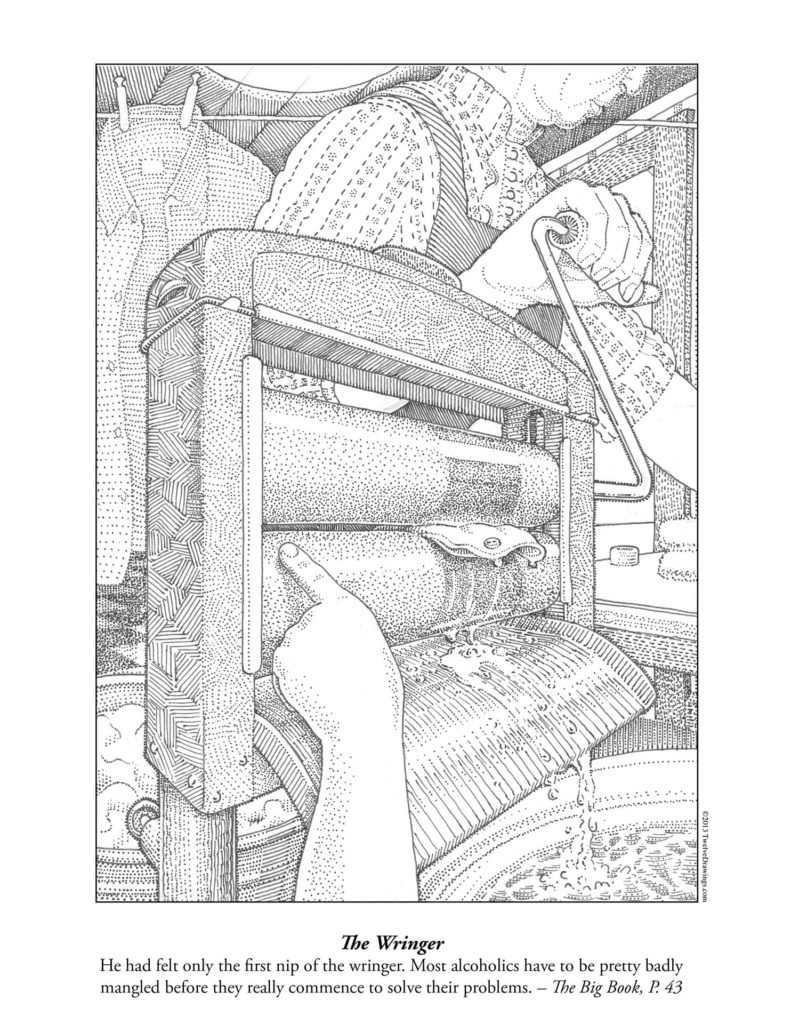 8. WRINGER
This drawing is important because laundry wringers have completely disappeared from the average home today. The people, places, and things that inspired most of Bill Wilson’s metaphors remain intact today, including ocean liners, jaywalkers, men without legs, etc. But it is mostly a dwindling number of older people who know first-hand what it means to feel the “nip of the wringer” or to be “pretty badly mangled” by it” (p. 43).
Until the early 1900s, clothes washing was a daily and time-consuming chore. Clothes emerged soaking wet from the washing process and had to be hung up to dry. If the sopping wet clothes could be wrung out before hanging up, it speeded up the process tremendously.
Thus, the roller wringer came into wide use. It was nothing short of a miracle in the eyes of homemakers for it shortened their laundry time without harming the clothes. Two rollers which were synchronized by metal gears would wring out the clothes quickly and efficiently. The earliest models (shown above) were hand-cranked. Electricity became widespread around the time the Big Book was written and an electric-powered wringer was a prized home appliance.
There was only one serious problem with wringers. The twin rollers were made out of an extremely stiff material (initially wood and then metal) and were sometimes coated with a thin layer of rubber. This combination made for a serious safety hazard since there was nothing preventing the operator’s hands, hair, or jewelry from being grabbed by the rollers, thereby dragging the struggling operator directly into the relentlessly grinding rollers. Though rare, wringer accidents could create serious injuries.
I am barely old enough to remember my grandmother running wet clothes through an electric wringer. The smooth rollers fascinated me and an irresistible urge rose in me to touch the seam where the spinning rollers came together. When my grandmother’s back was turned, I decided to touch those wringers in exactly that spot. I will never forget the ferocious way the fast-moving rubber rollers took hold of my tiny fingertip. By some miracle—my reflexes must have been lightning fast—I yanked my fingertip painfully back out of the rollers. My heart pounded fast and my fingertip burned with pain. That instant scared me badly, for I could tell the mindless machine would have happily gobbled up my entire hand. In Bill Wilson’s words, I had “felt the first nip of the wringer”.
When doing research for this Wringer drawing, I was surprised to learn that wringing washing machines caused horrible injuries in homes all across America. Friends recounted stories of women who had an arm yanked into such a machine and the result was blood and screaming. Someone whose grandfather was a doctor at that time reported it was not uncommon for women to fracture every bone of their hand and arm from a wringer accident (Gulp!). Bill Wilson was speaking literally when he said such an experience would leave the person “pretty badly mangled”.
Today, a new emphasis on safety surrounds all home appliances. A motorized wringer in its original configuration would raise serious liability concerns. But for many years, homemakers eagerly accepted the risks of the dangerous machines to spare themselves the drudgery of hand-wringing their water-logged laundry. Perhaps Bill Wilson was drawing a parallel… that many drinkers willingly endure the dangers of liquor to be relieved of their terrible cravings.
Regardless, people like me were lucky if we experienced only the “nip” of the wringer. That childhood scare was enough to convince me to never repeat the experience. Others—and Bill Wilson believes it was “most”—kept flirting with the risks until they were badly mangled. In either case, the alcoholic (and addict) remains forever strangely fascinated by the thrill of flirting with many dangerous practices. This is the only one of the Twelve Metaphors that I think the contemporary reader might require so much explanation of. The other eleven metaphors still carry their message unaided from the 1930s through to today.
Posted in Metaphors
← 9. Actor7. Jaywalker →