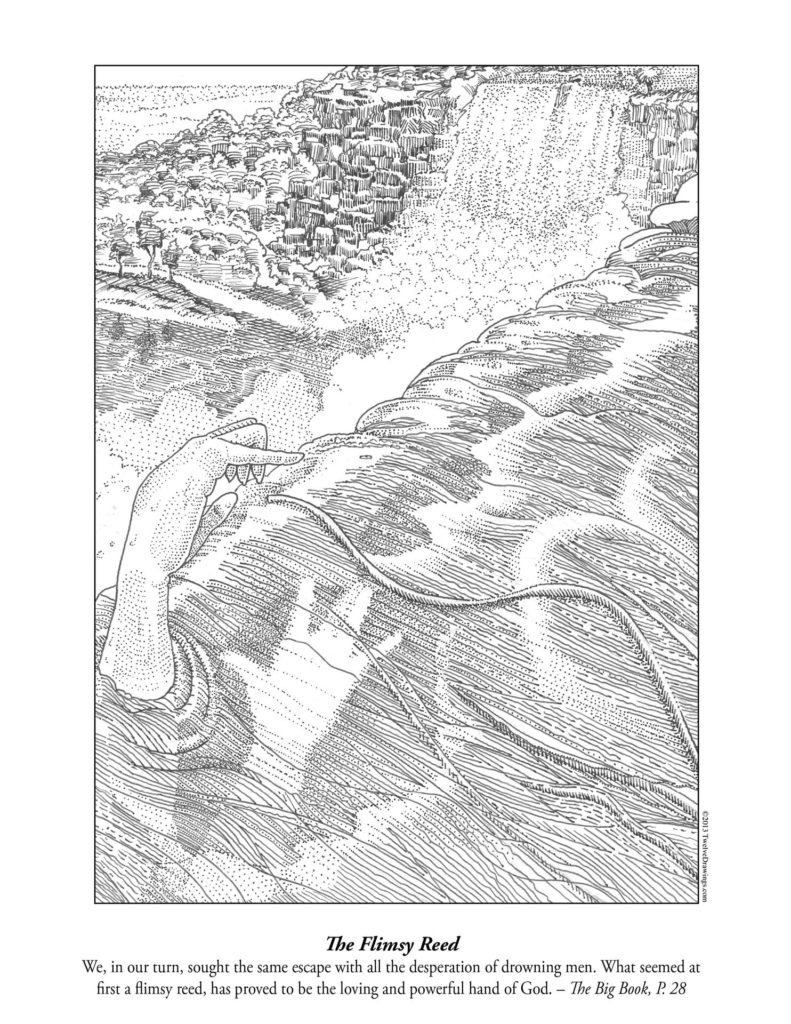 5. FLIMSY REED
Bill W. wrote the Big Book in a way that reminds me of everyday conversation, plus formal academic writing, plus grandfatherly advice, plus poetic prose. That poetic streak showed up in an obscure but (for me) powerful sentence on page 28. It reads as follows:
“What seemed at first a flimsy reed, has proven to be the loving and powerful hand of God.”
He was comparing the desperation felt by alcoholics (and later by addicts) to the panicked struggles of a drowning person who might literally grasp at straws. As often happens with Bill’s writing, I got the feeling I had heard it before. While much of his writing did draw upon literature and familiar sayings of his day, I could not find any clear origin for a “flimsy reed”. It sounded vaguely Biblical to me, but I was unable to find the term in those pages. Maybe he had another source or maybe he just made it up.
In creating my Twelve Metaphors, I skimmed the Big Book looking for word-based images that Bill probably made up himself. I can’t know for sure, but I did my best. I myself use a lot of metaphors when I talk and most of them appear out of thin air (“out of thin air” is an example). Some are borrowed, some are vaguely remembered, and some come from… who knows where. After searching for Bill’s source for a time, I gave up and decided to go ahead and illustrate this image.
This turned out to be one of the most technically challenging of any of my drawings. I won’t go into great detail, but I struggled to show one instant when a flimsy reed might actually make a huge, HUGE difference to a drowning  person. One such moment would be when a person is drifting towards the edge of a great waterfall. That would surely work. I began sketching with all my heart and was frankly surprised when a reasonably clear picture emerged.
The drawing shows a hand rising from rushing water as that water is about to plunge over a steep waterfall. Floating on the surface is a long and limp piece of reed. The hand is in a good position to grab one of the reeds, but at this point the situation looks hopeless. I somehow doubt that anything less than a steel cable and a powerful machine could rescue the person shown here.
Still, working the Twelve Steps often involves seeing things at first rather casually, then seeing them again in a much deeper and serious way. In fact, that’s what this metaphor did for me. Towards the end of my addictive days, I was out of answers and feeling desperate. I was all alone inside my head and there appeared to be no solutions left. Suicide was starting to sound smart (how asburd!). I wasn’t swimming anymore. I was drowning.
What happened next isn’t very clear in my mind. I know I latched onto a lot of things towards the very last. I kept lying, hiding, explaining, and pretending. But I also considered getting help. I remember picking up a phone and dialing a number and telling whoever answered that I was in trouble. Bad trouble.
The guy who answered that first Twelve Step call was a great person. He still is. But by any measure, he was nobody special….not a president, priest, psychologist, or prophet. To me he was just some voice in a Twelve Step program who was taking calls that day. In short, he was a very wet and flimsy reed, but I grabbed onto him with every ounce of strength I had left.
Somehow, my grasp on his voice kept me from slipping over the edge. That ordinary guy’s presence became like a steel cable for me. And through his simple words and actions, the most powerful Force in the universe began to steadily pull me away from the brink of death. Literally.
I could type on this keyboard all day and never fully express my amazement at being alive today. That phone call led to some meetings. Which led to a sponsor. Which led to the First Step. Which led me to a God I could understand. Which led me to a spiritual experience. Which led me to be alive today.
When Bill W. wrote that a flimsy reed could be the loving and powerful hand of God, I frankly did not believe it. As defeated as I was, I still didn’t want to admit that anyone else was right except me. How wrong I could be. How glad I am that Bill could help me hold on and keep coming back until my loving and powerful Higher Power got me firmly in His grasp.
Posted in Metaphors
← 6. Legs4. Passengers →