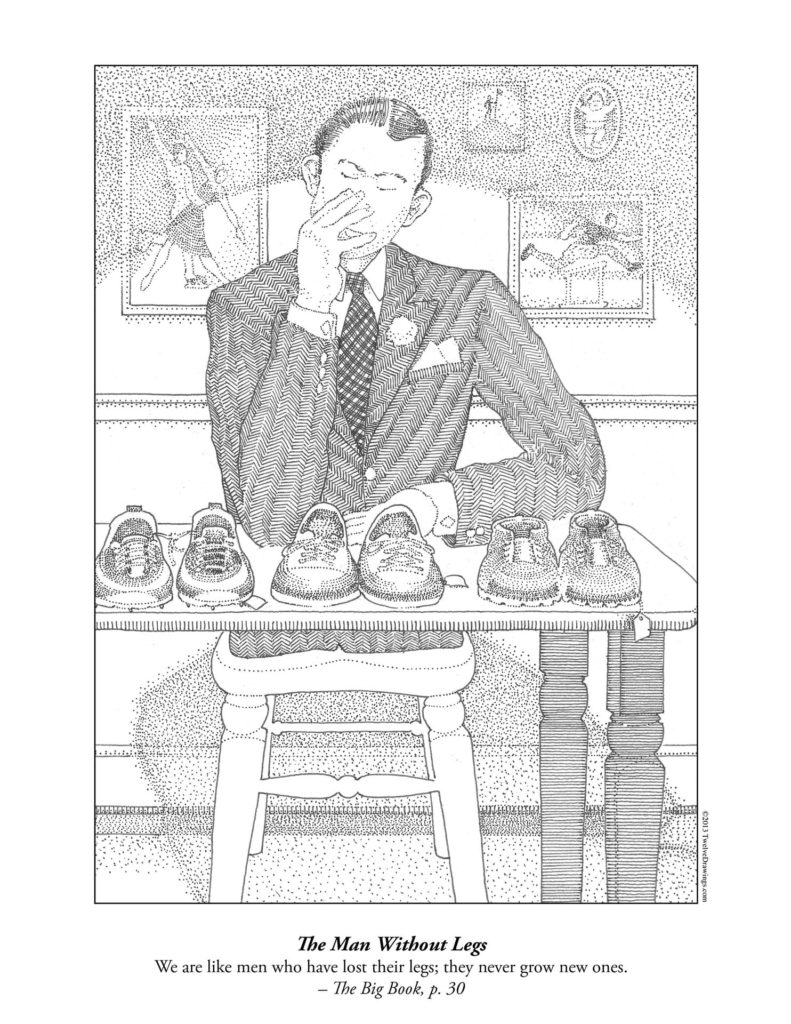 6. MAN WITHOUT LEGS
On page 30 of the Big Book of AA, Bill W made a statement that has always haunted me. He wrote “We are like men who have lost their legs; they never grow new ones.”
Here was a sentence that left no room for escape. Bill had to leave no loopholes here. He already stated elsewhere that every newly arriving addict and alcoholic is obsessed with getting back the pleasures they recall from earlier days. The user clearly remembers enjoying a harmless little indulgence and the next thing, they were pitifully and hopelessly hooked. All they want is to rewind that memory like a movie and replay that early good part over and over.
It was Bill W’s goal to invite as many alcoholics into recovery as possible. Yet he stubbornly included the very statement that none of his recruits would ever want to hear. He used this single-sentence metaphor to squash the greatest hope and comfort of every person in recovery…..the wish to go back, back, back.  It is an astonishingly blunt and brutal statement, considering the temporary pain it caused people like me.
Today, I have to give Bill W. a lot of credit for writing those words. He had the guts to confront me….or ask me to confront myself. I’ll admit it. I wanted to go back badly. I wanted the happy times. Just like when a good marriage turns bitter, or a beloved job is lost, I yearned for those wonderful, carefree, joyful, and innocent days. Those fun-filled days never appeared more glowing and lustrously perfect as when viewed from first-time visit to a recovery meeting room. It took a lot of courage for Bill to tell all who enter recovery that they must fully close the door of illusion behind them.
I made drawings of twelve of the many metaphors that appear in the Big Book. It should not surprise me that this one was especially bittersweet to draw. It shows a man of good standing, financially, emotionally, socially. And only after a moment does the viewer realize that he is a greatly diminished man. He has lost his legs by unknown means and is reduced to putting his own shoes up for sale. There is a dismal and yet elegant grief to this picture. He has resigned himself to his situation—maybe quickly and maybe slowly—but he has arrived at acceptance.
Where do his thoughts wander as he waits for these belongings to find new owners? Where did mine go? I had started so many ventures with great excitement. I had expanded my circle of friends tremendously. I had become admired for talents I didn’t know I had until I became addicted. The world had seemed larger, the air clearer, the future brighter. And now it was all piled in a heap of memory. Gone but still able to torment me with its absence.
I cannot tell you more about the man without legs than you yourself can see. There is no more “backstory” to my drawing than there was to Bill W’s simple sentence. What once was, is no more. What will be, is yet unseen. It is a lonely place to start anything, which I suppose is why recovery people seek meetings. We are tasked with facing the world without all the fascinating trappings of our addiction. That probably doesn’t sound that so tough to others. But I can tell you that I almost died resisting it, before my Higher Power showed me how I could be happy, joyous and free again.
Posted in Metaphors
← 7. Jaywalker5. Reed →