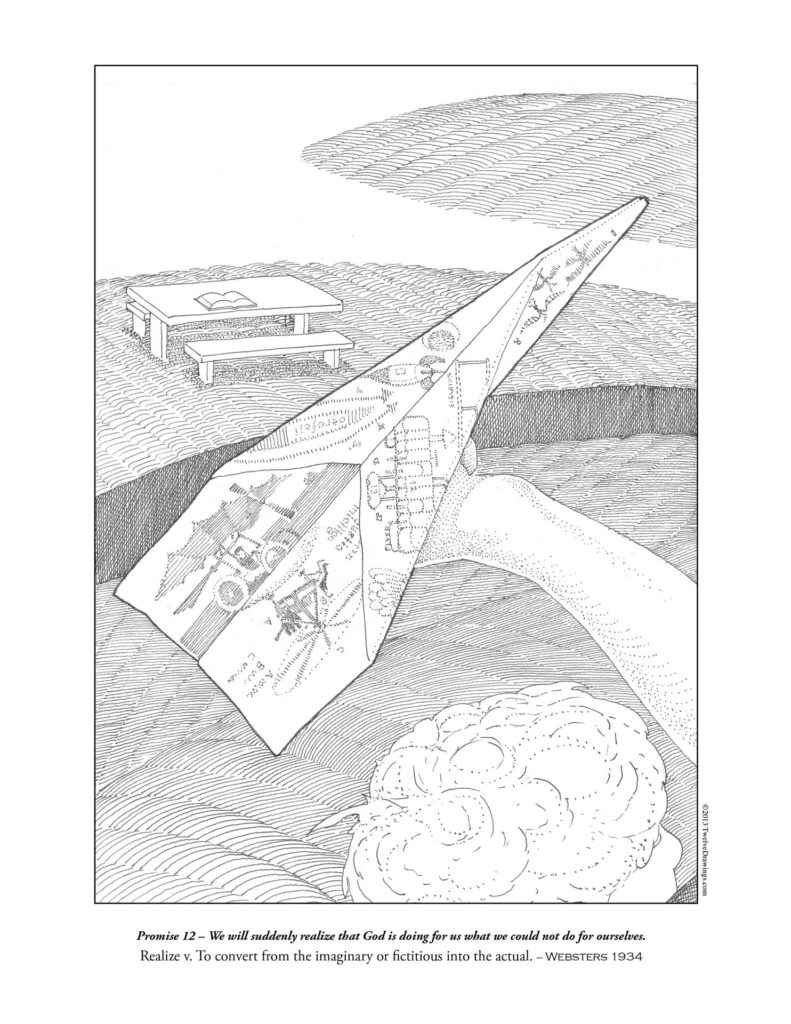 12. REALIZE
Sometimes, the definitions I find in my 1934 Websters Dictionary come as a complete surprise. I love it when that happens because it opens a new door into understanding exactly what Bill W may have meant when he used that specific word. (It is worth noting that Bill was no slouch at writing—having grown up attending Vermont private schools and later studying law in Brooklyn, NY.) However, the Webster definition for the word “realize” is not particularly surprising.
Realize v. To convert from the imaginary or fictitious into the actual.
Before I attended any Twelve Step meetings, my understanding of recovery was based on what others said or on whatever I imagined. For example, I always heard recovery meetings were a perfect example of a “self-help group”, where people could work on improving themselves. I also heard Twelve Step groups were a classic type of “support group” where people with a similar problem could find sympathy and understanding from others.
Those were my impressions. Now that I have been attending weekly meetings for more than a decade, I question the truth of my early assumptions. (A reminder here that I am sharing my own point of view, and others would describe their experiences differently.)
I no longer believe that I got much “self-help” from the Twelve Steps. While addicted, I spent most of my time helping myself to everything, but that just made matters worse. I was exhausted from helping myself and I still was not sober. For me, “self-help” was a fictitious phrase—my help would need to come from outside of myself.
I personally do not think I got sober because of a “support group”. The group did offer important sympathy and understanding—in fact they did so for several years but it produced no results. I never did get lasting sobriety until I worked the Twelve Steps and had a spiritual awakening. In the end, I needed help that no one—no human—could provide. Old timers in the program have wisecracked, “You can attend PTA meetings for years, but that won’t make you a parent. You must take other steps.” If I imagined that I could get sober by simply surrounding myself with supportive people, I was wrong.
The Twelfth Promise is: “We will suddenly REALIZE that God is doing for us what we could not do for ourselves.”
Realizing something requires that I convert my imaginary and fictitious expectations into something actual. The sooner I gave up on finding “self-help”, the sooner I could begin to earnestly seeking help from a Higher Power—I myself could not do both. That Higher Power needed to be something more than a “support group” of other humans like myself. Until I opened myself up to that possibility, I could never find it.
I notice that this Twelfth Promise is the final promise….hinting that it may come true later than the others. We all work the Steps at our own speed, for our own motives, and with our own understanding (or misunderstandings). I know that was true for me. But only much later did I come to realize just how much God had done for me that I had been powerless to do.
I am not against “self-help” or “support groups”. But I am grateful for what happened once I stopped relying solely on them and worked the Twelve Steps exactly as I saw them in the literature. I entered the program with a mind full of imaginary and fictitious expectations. Once I let them go and let God work, sobriety came within reach one day at a time.
••••••••••••••••••••••••••••••••••••••••••••••••••••••••••••
My illustration for this Promise is both childish and serious. In it, a boy is about to throw a paper airplane. The folded paper bears elaborate diagrams and images depicting fanciful flying machines. In the background is an open book resting on a picnic table. What is left unspoken is that the boy has grown tired of reading about imaginary flying machines and has torn out a page and folded it into an actual flying device. I can identify with his decision to move from the unreal to the real. It took me years and years to make that same decision…some call it “hitting rock bottom”. But once I stopped living in an imaginary and fictitious world, I was able to enjoy my real life again.
Posted in Promises
← Promises11. Baffle →