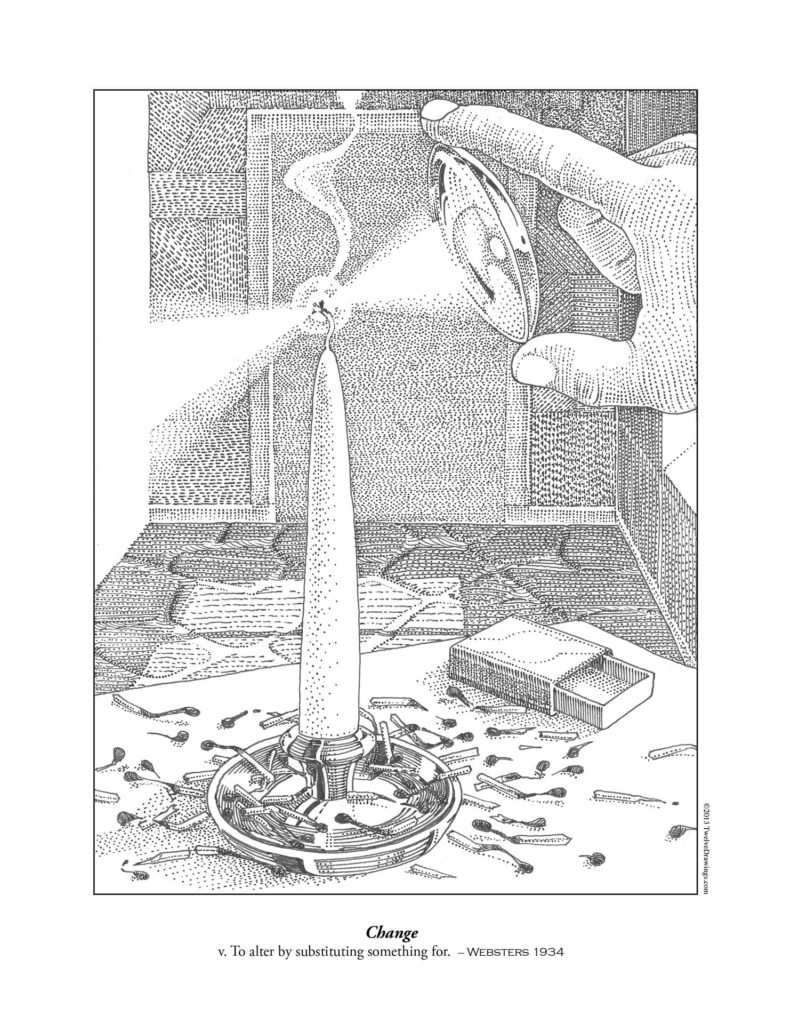 8. CHANGE
“God grant me the serenity to accept the things I can not CHANGE”
The word “Change” seems simple enough; it describes one thing becoming another. Picture a chrysalis becoming a butterfly. Or, it could refer to exchanging one thing for another, like changing a light bulb. The 1934 Webster’s Dictionary definition confirmed all of this.
The definition: “Change v. to alter by substituting something for”.
Fine; that definition was settled. So what about the drawing? The Serenity Prayer has been beloved among Twelve Step members for decades. And the word “Change” is one of its most important concepts. So, what change are we praying for here? Nature changes a chrysalis into a butterfly without requiring any awareness or decision by the creature inside, so that’s not it? It is simple and easy to change light bulbs, so we are not asking for that either. This must be a different sort of change, but what kind?
For inspiration, I prayed and meditated, just as I did before starting all my drawings. I cannot recall how this this particularly elaborate scene unfolded in my mind. I think the candle emerged first, then the magnifying glass. Then I could envision the scattering of spent matches and strong sunlight streaming into the room. I don’t think I altered a single detail between the preliminary sketch and the final drawing.
When I was finished, I felt choked by with emotions. In the course of creating my Twelve Drawings, I recognized that a sudden welling up of emotion was a sign that I had been true to my original inspiration. Mine were not tears of sadness, but rather a sense of relief and joy.
The matches described the futility of my self-will. While gazing at those curled and charred matches, I thought of every time I had tried to “do better” for my kids or my wife—but utterly failed. I did not like who I had become, yet I couldn’t stop. I could identify with the futility of trying the same solution again and again, only to come up short.
That magnifying glass made sense for several reasons. Once the person used up their last match without succeeding in lighting the candle, they probably felt completely stuck. They probably searched a long time for more matches. No luck there. Out of desperation, the failing person had to frankly fact facts. The solution had to be found IN the room, but the only source of fire inside the room was now gone.
The dictionary mentions “changing by substituting something for”. That resonated with the many places in recovery literature that urge us to change from self-will to the will of a Higher Power. I don’t know what led the person in this drawing to switch to the magnifying glass. Was it brilliant inspiration or miserable desperation? I don’t know. Regardless, they realized they could access a solution coming from OUTSIDE the room—the sunlight streaming freely through the window.
Anyone who has found some Serenity through the Twelve Steps knows that the idea presented in my  drawing is not remarkable. It embodies our need for a Higher Power OUTSIDE ourselves to change our selves. Maybe that sounds cliché. But when you have been rescued from dark enough realms, gratitude beats the daylights out of originality.
Posted in Serenity
← 9. Courage7. Not →