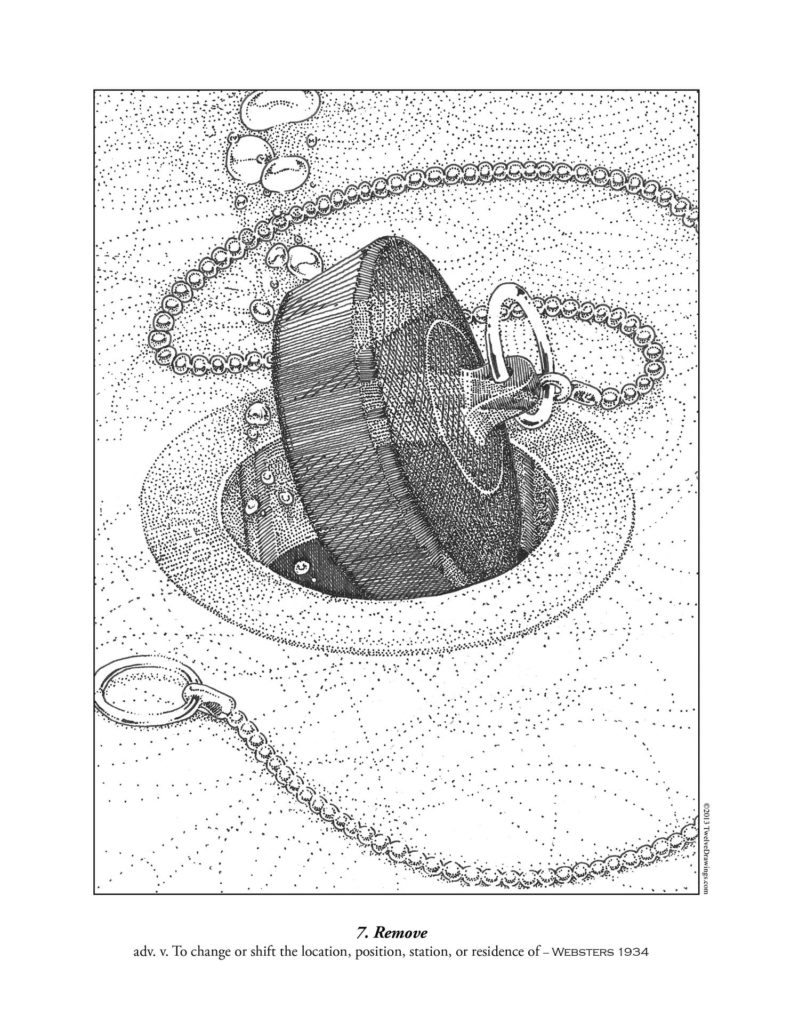 7. REMOVE
The 1934 Webster’s Dictionary gave me a very lively connection with the Twelve Steps. It revealed the exact meanings of the words used in the Big Book. Take the word “remove” as found in Step Seven: “We humbly asked God to remove our defects of character.”
Before finding the 1934 dictionary, I had always assumed that the word “remove” meant “to make something disappear”.  You know, like when I erase a written word or wash away a stain. When I worked Step Seven, I expected my Higher Power to make my dishonesty, fear, selfishness, and inconsideration disappear.
The trouble was that my defects kept creeping back in. When I asked Him to remove my dishonesty on Monday, I often found it had returned on Tuesday. A few instances of this led me to doubt God’s ability to remove any of my defects of character permanently. I felt a little resentful that God wasn’t meeting my expectations. If He could make my defects completely disappear, why didn’t He? I turned to the dictionary and found this definition:
“Remove: To change or shift the location, position, station, or residence of;”
The dictionary didn’t say anything about making my defects disappear; it just said, “shift the position”. This definition hit me hard. Viewed in this light, the Seventh Step tells me my defects will always remain nearby, just in case I get the insane urge to invite them back in. This new information forced me to let go of my old—and utterly illogical—assumption that God wanted to make me “perfect” like Him. Thanks to that old dictionary, I found a new appreciation for Step Seven.
This and other examples of 1934 definitions redoubled my interest in the Steps. What could I do with my enthusiasm? If I went to my local meeting and urged everyone to start reading musty old dictionaries, they would label me as insane. If I typed up the definitions and handed them out, very few would ever get read.
I am an illustrator, so I turned to my sketch pad. I reflected on the newly discovered definition of “Remove” and began scribbling ideas. I’d never heard of anyone turning their meditations into drawings before, so I wasn’t sure how to proceed. I felt a little foolish at first, but I prayed for serenity and courage as I worked.
I asked myself “What’s something that we remove but never stays removed?”  Finally, an image started to emerge. I remembered my grandparents’ 1930s bathtub. When the rubber drain stopper was removed, it would float aimlessly around in the bathwater for a time. If left to drift, the plug would follow invisible currents in the water and eventually make its way back onto the drain hole. The round plug might block the hole completely, or else turn sideways and seriously slow the water down.
As quirky as the memory seemed, I had to admit that it fit the definition perfectly. When God removes a defect from me, the defect never goes completely away. Sometimes it drifts harmlessly around, and at other times it returns to either partially or completely block me off from God. I busied myself at the drawing table and soon had a finished drawing. It was an enormous rubber bathtub drain plug. You heard me right.
“People are going to think I am absolutely insane!” I thought. I gingerly showed it to someone, then another, then another. The reaction was always the same, “Can I have a copy?” When I showed them my non-recovery drawings, they would say, “How nice *yawn*” and hand it back to me. But these drawings affected people… both in and out of the program. I don’t try to understand it. The drawings are the result of prayer and meditation, so I suppose they don’t need a lot of explaining.
All I know is, I no longer harbor the notion that my Higher Power wants to make me perfect. He doesn’t want my defects to permanently disappear. All I am expected to do is make daily progress. If I want my defects cleared away in the next twenty-four hours, all I must do is ask Him to remove them now.
Posted in Steps
← 8. Harm6. Ready →