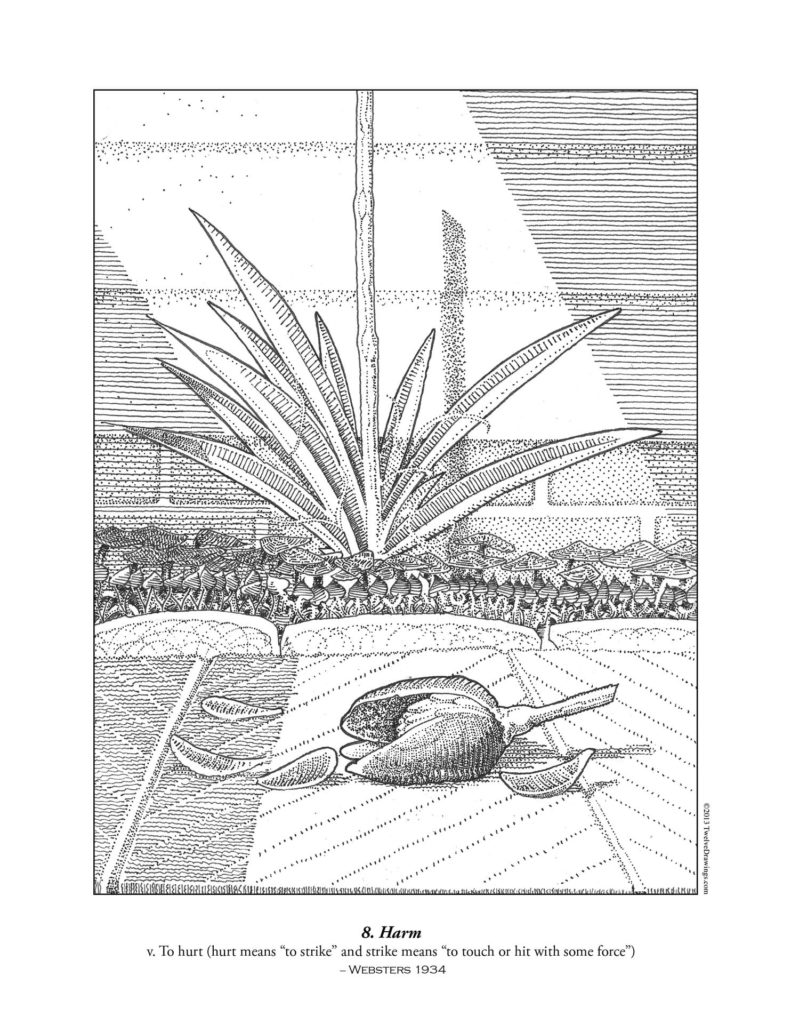 8. HARM
I reached Step Eight: “Made a list of all persons we had harmed, and became willing to make amends to them all.”
The word “harm” was a strong choice for the Step Eight drawing. Unfortunately, I found the Webster definitions ran in a loop on this word:
•   My old Webster’s dictionary offered this basic definition: “harm v. –  to hurt”
•   Frustrated, I flipped over to “hurt” and found that it means “to physically injure”.
•   Frustrated again, I went on to find that “injure” means “to harm”.
The above definitions literally go in a circle. I found an etymology dictionary which confirmed the above, but helpfully added that the injury could be “to the body, feelings, reputation, etc.” I am no scholar, but everything pointed to “harm” as meaning:
“to injure the body, feelings, reputation, or finances.”
Thus, whenever I make a list of people I have harmed, I try to identify which type of harm. I know some people might furiously object to my conclusion*. They might say that harm can take almost any form and should not be restricted to these few choices. But I know my insanity stems from “a lack of proportions, of the ability to think straight” (Big Book p. 37). I personally need proportion and straight guidelines or I literally go insane.
I found this simple definition especially helpful in combating what Twelve Step folks call “stinkin’ thinkin”. I had been literally tormented by the memory of my children going to high school prom without a dime of support from me. I am almost certain they bought their clothes at second-hand stores and drove our old junker car to the big events. I felt my insides ignite with molten, raging regret whenever I pictured them standing in humiliation in front of their friends.
Reality check.
• Did I injure their bodies? No. They had good food, water, a roof, and parental care.
• Did I injure their feelings? I don’t honestly know because I never asked them.
• Did I injure their reputations? In no way I can see, all these years later.
• Did I injure their finances? This is the hard one. Did I INJURE their finances? As in reach into their pocket and remove money? No. But my guilt would rush in and observe that I FAILED to fill their pockets with money. True statement. I failed to fill their pockets with money. Would an objective third person call that an injury? Neglect maybe, but not injury.
My jaw dropped. The guilt that had allowed me to rip my insides apart vanished. Objectively and spiritually speaking, I had not injured them. I failed to give them what I wanted to give. But God was taking care of them just as He takes care of all his children. I am not Him.
“I am not God.” Those are the words I have heard people in recovery blurt out as if it were news. And now it was my turn. I didn’t destroy my children, as years of bitter guilt would have me believe. My kids are doing okay; better than most of their friends in terms of bodies, feelings, reputations, and finances. Not because of me. Because of their walk in life and their dance with a Higher Power.
My drawing is pretty simple. It shows a flower that lies fallen on the ground. It may take a few moments to realize that the flower did not break, but was cut by something sharp. Not by the loving hand of the gardener, who would likely never leave it laying thus. It was cut by a malicious hand, and left as a sign of vindictive cruelty for the gardener to find too late. A sign of victory by the harmer over the harmed.
It is a petty thing, I grant you. But it was the example that leapt to my mind as I drew. I believe it fits because a flower’s stem and roots do not DIE from having the flower itself clipped off. The injury was not a fatal one. The plant still lives and will grow another blossom if kept healthy.
Injury is like that. Those people who I believe I devastated? Most of them have moved one to find better friends, lovers, or loved ones than I was. But in Step Eight, I must step up and name them all. Remember the unkind cut…the injury I inflicted, and put it on paper for my sponsor to review.
These Twelve Steps healed my own body, mind, and spirit by such small steps. Piece by piece. Cut by cut. In making a list of my inhumanities for Step Eight, I was reestablishing my own humanity, really. And that is not a bad step along the way to becoming sane.
* NOTE: I have been in recovery for years, not just for days. During that time, I have met many solidly sober alcoholics and addicts who came to very different conclusions about the best path to Twelve Step recovery. Some believe in daily affirmations, inventories of positive assets, specific eating guidelines, rigid prayers, sobriety partners, and other practices. Some insist that sobriety is impossible without their practices. But to be honest, I never depended on those things. Do I see controversy brewing in these differences? Not really. I believe recovery happens in a sacred space between a person and their Higher Power. I call it a “sacred space” because I believe it exists somewhere above the human plane (thus the phrase “Higher than human power”). How I get there depends on factors that are as personal to me as my own fingerprints. But get there I must. Any action, decision, or attitude that leads me there and keeps me there must surely be an important part of my correct path.
Posted in Steps
← 9. Amends7. Remove →