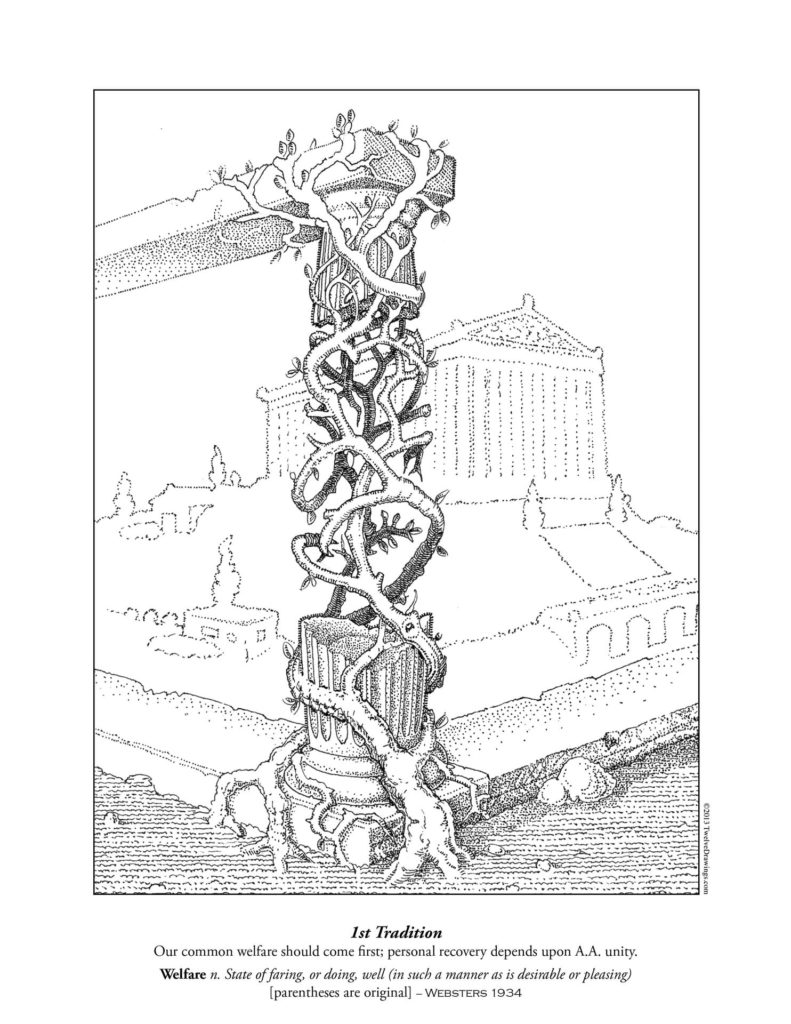 1. WELFARE
The book Alcoholics Anonymous claims that an alcoholic is like a man who has lost his legs; legs which cannot and will not ever grow back. This was painful news to me. Like many addicts, I genuinely believed that a return to the lifestyle I remembered was possible, but without any of the negative aspects. Being told that my future would never truly resemble my past was hard to hear.
Now, with the benefit of lengthy sobriety, I recognize my old life has not returned. Nor could it. I have changed the basis of my life to include the daily influence of a Higher Power. If you removed everything else about me, that fact would remain at my very core.
As I reflected on the first tradition of A.A., it had idealistic ring to it: “Our common welfare should come first; personal recovery depends on A.A. unity.”
At first, I thought I was hearing echos of the Three Musketeers cheer: “All for one and one for all!” However, I believe those fictional swordsmen were fighting against outside enemies. My only enemies in addiction came from myself.
I looked up the definition in Webster’s 1934 Dictionary: Welfare n. State of faring, or doing, well (in such a manner as is desirable or pleasing). That seemed pretty vague. Welfare basically means faring well? Seriously?
To compose a meaningful drawing, it took considerable extra effort to clear my mind. How could any a group support someone who no longer had the strength to help themselves? My mind jump to the image of a sturdy stone columns. Such powerful pillars once supported ancient buildings. Although many have since fallen, others remain standing even after thousands of years.
So, did Twelve Step recovery provide me with a huge, solid column of stability? The answer is no. I found no single word, phrase, or paragraph which would become my bedrock. Not at all. Over many meetings, I experienced recovery to be more like an intertwining of many individual experiences, stories, beliefs, and actions. Were all of those woven parts trivial and random? I don’t think so. Together, they seemed to make up a very essential aspect of the program’s effect on me.
My moral core was dissolved by addiction. It had once been there, but it vanished in a day-to-day descent into my sickness.
My recovery group held me in place as my body, emotions, and spirit began to heal. Somehow, I just couldn’t get back my original solid core, any more than a man can regrow his lost legs. But my sobriety could be held upright through the coming together of others like me, working the steps, and using sponsorship. Those things felt weak as a wispy vine at first. Gradually, they became stronger every as I relied on them more and more.
What I had once relied upon for strength was replaced by something completely different. I have become one of many parts of the Twelve Step recovery experience. Each one of us provides experience, strength, and hope for others. This unity becomes a firm support for our personal recovery.
Posted in Traditions
← 2. ConsciencePromises →